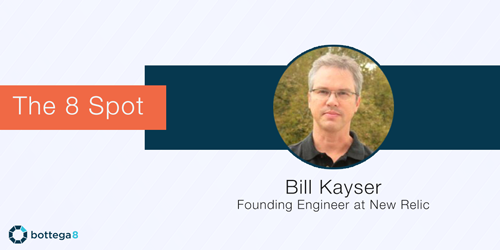 For our second 8 spot interview I’d like to introduce you to Bill Kayser the founding engineer at New Relic. For those not familiar with New Relic, it’s a software analytics platform that helps you make sense of your web or mobile application’s data. It’s often used to gain business insight and help drive decisions based on the data that your software is producing.

Before New Relic, Bill worked in various roles in technology from a consultant at IBM to a software architect at SupplyChainge as well as a Development Manager at Wily Technology. Currently, he’s a Software Architect at New Relic where he works on multiple different projects within the company.

What made you decide on a career in tech?

I started programming computers when I was 12 years old. I enjoyed writing games and simple apps for my dad, but I had a lot of other interests and was never sure I’d choose that career. In college my undergraduate advisor was Donald Knuth. I learned from him what a real computer scientist was, and I also saw in him every day the same kind of wonder and joy solving problems that I always had. That’s when I knew I wanted to do that for a living.

What or who inspires you?

I am inspired by audacity and determination. I love the underdog, the aging athlete that defies the odds and dominates a sport long after everyone wrote him off, or the genius that comes out of nowhere, like the great Indian mathematician Ramanujan.

What is your go-to app?

I’m a pretty boring smartphone user. I haven’t really found a lot of apps that have been very impactful on me day to day. But I have in mind a few apps that my kids use which have really inspired them beyond my greatest expectations.  One is a music composition site called Noteflight. The scratch programming environment has transformed my oldest son, and of course Minecraft opened up both my kids to a vast world to explore and create.

Finish the sentence: “If I’m not working, I’m…”

What was a challenge you faced in your career and how did you overcome it?

When I was much younger I worked on a big project where a lot of responsibility was placed on me to deliver a new tool that would reimagine the way our customers would interact with our system. I invested a great deal of time and energy into a very specific user interface that I was sure would be a huge leap in productivity for our customers. My manager was supportive but his boss, the chief scientist, saw my prototype and immediately started suggesting changes which seemed to me like they undermined everything I was trying to accomplish. I had a major confrontation with him, in front of my boss, and it even got physical at one point as he grabbed my arm and shook me out of frustration, as if he were trying to shake some sense into me.

When the meeting finished I was distraught, and convinced I was about to be fired. However, the chief scientist must have been embarrassed because he calmed down, sought me out later and said something like he appreciated my enthusiasm and was sure I was going to do a great job implementing his suggestions.

At this point I had nothing to lose. I couldn’t go back and start over, especially with a design I didn’t like. At that point in my career I was full of self confidence, convinced I still knew the users better than the man who pretty much created the field, our chief scientist. So I worked on a new prototype incorporating some of his ideas. When I went back and showed it to him, I made it clear I was enthusiastic about the changes but I was still struggling to solve some other problems. I went back and forth with him, explaining the problem, asking him questions, soliciting his ideas, but not once did I suggest a solution. I waited, was patient as he proposed different solutions, steering his logic along a path which I knew would lead him right to the big idea I had wanted to implement in the first place. And sure enough, he eventually got there, to a design that was essentially what I had started with, but one which he believed to his great satisfaction that he had deduced entirely on his own.

What do you find interesting about what you do?

The most interesting thing about the work I do is discovering new insight into things about which I thought there was nothing new to uncover. I am always finding new and interesting patterns in the data we collect about our customers’ applications.

What’s the best advice anyone has given you?

Early in my career I had a boss named Norman. I would get emotional from time to time about what I was working on, taking offense much to easily or getting frustrated by a lack of support. Norman was really good at talking me down from those places. Once he said that he had a boss who told him “100 years from now nobody’s going to care about this.” It’s not a very original thought, and it’s definitely not a very empathetic position to take when someone is getting really worked up, but the more I thought about it, the more I realized that it really means there are more important things in life. No matter how urgent you think your problems are, there’s a bigger picture to think about and in the grand scheme of things, you’re only going to make yourself miserable. So I still think about Norman and his advice every now and then, to this day. I’ll pass on that nugget to coworkers from time to time but whenever I do I think it just makes them want to hit me.

I like my dad’s motto.  “There’s no limit to the amount of good one person can do if that person isn’t concerned about who takes the credit.”  I heard that a lot growing up and I really believe it’s true.  I’m pretty sure my dad didn’t make it up, but I guess the point is, who cares?  It’s a great rule to live by.

Well that’s it! Hope you enjoyed this installment of the 8 Spot. You can follow Bill Kayser on Twitter here: @bravoking.

—
Thanks for reading our 8 Spot interview! If you liked this post it would mean a lot if you used the buttons below to share it with a friend, tweet it out, or post it on LinkedIn. Remember, you are awesome and thanks!

Spends time listening to customers and thinking about ways to help businesses reach their goals. Writes about everything from product design to business.

Oversees all technical strategy and implementation for clients. Writes about everything from technology to business.