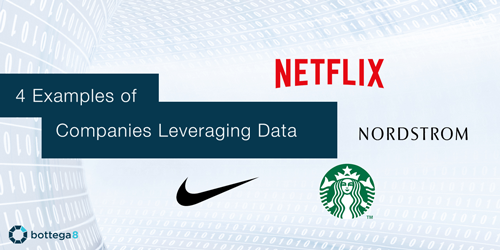 These days every company is talking about data and how they can use it. They have gone so far as to dedicate whole departments and millions of dollars on figuring out how to best use data. Some ways that companies have leveraged data are to create better products, provide better services for their customers, and help make critical decisions. Below are 4 examples of how some companies are doing this.

Netflix the streaming video service is notorious for using data to benefit it’s customer base by providing better content and a better experience. One notable example is that they used anonymous data from consumer viewing habits to create the Netflix original series “House of Cards”. They used specific user data to make a connection between people who liked to watch the old BBC version of “House of Cards” also liked to watch Kevin Spacey movies. This insight from their data helped them cast Kevin Spacey in the Netflix original series of House of Cards.

You can read more in this New York Times article.

When people think about Nike they think about shoes. But in recent years, Nike has evolved to build wearable products like the Nike Fuelband and their accompanying Nike+ mobile app. With these devices and apps, Nike is able to generate and aggregate fitness related data like number of steps, heart rate, calories burned and more for their consumers to analyze. It’s clear that they are as much as a retail company as a device and software company.
Here’s an article that details how Nike is blurring the lines between what they traditionally do and what they are doing now and in the future.

Starbucks’ global market planning manager stated at a conference that “Starbucks uses an in-house mapping and business intelligence platform called Atlas to determine where to open new locations”. For any brick and mortar store like Starbucks location is vital to it’s success. Starbucks leverages a multitude of data sets and overlays them together to strategically choose it’s store locations. Some data they look at are traffic data, consumer demographic, safety information, public transportation stops, office/retail clusters, and many more sets of data.

In a talk I attended last year by David Von Lehman, from the Nordstrom’s Data Lab, described how Nordstrom uses data from in-store purchase and browsing history to build a recommendation engine for their online store. They also use social media data from Facebook, Twitter, and Pinterest to contribute to figuring out which products to promote on particular channels.

Make Data Work for You

In all these examples, data has been applied to benefit their business. They didn’t fall in the trap of just collecting data and doing nothing with it. They actually put data into practice and took action.

In an effort to help you not fall in the trap of just collecting data, here are some questions to ask before you take action on it:

Asking questions like the one’s above help you define what you want to use your data for and how you want to act on it.

How do you use data at your company? If you don’t and you think your company should be, how do you think it would help your role or organization? Let us know in the comments below!

Spends time listening to customers and thinking about ways to help businesses reach their goals. Writes about everything from product design to business.

Oversees all technical strategy and implementation for clients. Writes about everything from technology to business.